This Saturday on the 14th of May ExtraWize was present at the King of Tallinn event at the newly opened Spot of Tallinn. King of Tallinn is an international BMX cross race, which brought the cream of the crop of strong young European BMX cyclists to Estonia. Elite BMX cyclists from neighbouring countries were collecting points at the race in order to qualify for the Rio Olympic Games, while Estonia’s best BMX cross cyclists were also taking part in the race and giving their all in front of the hometown crowd. About 300 athletes from 12 different countries were ready at the starting line.

The winner of the race was Kristens Krigers, who is an up-and-coming Latvian male BMX rider who competed at the 2015 UCI BMX World Championships! The second place went also to Latvia to Kristaps Veksa and the third place to Boris Ponomarev (Russia). Congratulations to also to all the other amazing participants! The winners collected valuable points as they are dreaming of qualifying at the 2016 Summer Rio Olympic Games this August. BMX racing became a medal sport at the 2008 Summer Olympics in Beijing. 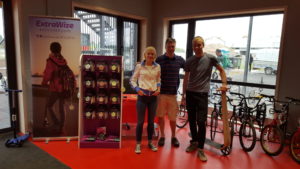 The ExtraWize team was there to introduce the double-glowing GloDisk reflectors to the cyclists and the audience. The GloDisks reflectors were also inside the goodie bags that all the BMX cyclists got as a present after the race. The reflectors are a perfect fit for the athletes as the glowing GloDisk makes it easy to be visible even when training or driving at night. The double-glowing effect and the safe carabiner attachment give the athletes the security of not losing the reflector that usually happens with other products on the market.

The 2-day event took place the newly opened Spot of Tallinn adventure sports centre. The cool centre is located near Tallinn, in Peetri and is unique in the whole of Europe. Spot is unique thanks to its versatility, offering world class facilities for extreme sport fans and excellent opportunities for developing workouts. The indoor attractions at Spot have been designed by Nate Wessel (USA), head designer for the Woodward centres. The world class BMX cross course next to the centre was designed by Tom Ritzenthaler (USA), who was also responsible for designing the tracks at the Beijing, London, and Rio de Janeiro Olympics.

Thank you to Spot of Tallinn for having us and good luck to the future champions of BMX cycling!